We often confuse boldness with bravado and the two could not be any more dissimilar. According to dictionary.com, BOLD means: not hesitating or fearful in the face of actual or possible danger or rebuff; courageous and daring.  BRAVADO means: a pretentious, swaggering display of courage.

What does bravado look like?  What follows is a story I posted temporarily to my Facebook page several months ago.  It was titled “Words Have Power.”

There was a girl/ young woman I once knew who used to spew the most vicious, venomous, and soul-crushing things from her mouth.  As a child, she learned how to use her education and love of the English language to craft the most perfect verbal weapons of mass destruction (not always a litany of foul language either). Never one to start trouble, she was quick to end it verbally or physically if necessary—justifiably so.  She eventually built quite a reputation for herself.  To her family, she was (and is still) affectionately known as “1980’s Kim”.  The irony of it, is that this person was nice, kind and loving–probably to a fault—probably not.  However, these skills were honed from years of being bullied on the playground and other typical childhood angsts. She had no choice at the time—she had to defend and protect her siblings and best friend as well.  Because—you see—being quiet, shy, and kind often made her a target ALL the time, and so these weapons always lay in wait—very much like a time bomb. By 8th grade, the kids pretty much knew “the quiet one” was not to be messed with. Eventually, the bullies left her and ‘hers’ alone but that mouth… oh, that mouth.  That NASTY LITTLE VIPER stuck around for a long time…

I’ll stop here because this is a great example of how I used bravado instead of boldness against my intimidators.  Although I was forced to be brave, it was pretentious and eventually became a “swaggering display”—more of a shield.  Bravado does serve a purpose—but should only be temporary.  After all, how does one stare danger in the face and triumph?  But sadly, many of us literally live in a constant state of bravado, not realizing it suffocates their true boldness, that is, their authentic courage.  Let’s continue…

Many years later, that woman managed to put that part of her into a “coma”.  By “coma”, meaning she no longer used those words even when there was clearly justification to do so.  She didn’t do this because she no longer needed to fight or be defensive anymore.  She did it because she learned that there were other options to fight back and defend herself and her beliefs/opinions, etc. She did it because she realized that eventually the CONSTANT use of haranguing could one day turn back and poison her—Words in→ Words out→ Words IN (those who have ears to hear…).

Make no mistake. She’s not dead and is FAR from perfect and therefore still very capable. And yes, unfortunately, she has been known to attempt to shake and rattle at that “coma” every now and then.  But at the END of the day and with God’s grace, she makes the ever conscious decision—CHOICE not to go there.  She knows that there are better ways to get a point across without filleting her own spirit and those around her in the process. Did this weaken her?  No, quite the contrary, it made her a stronger, more THOUGHTFUL, and thought-provoking woman. She learned that it’s all about choices—and character—and protecting the peace of her inner spirit. WORDS are NOT random. They carry POWER and weight, and tell the world who you TRULY are.  Use them wisely.

Interesting enough, I took a bold step to write and post this to Facebook.  I wanted to help a younger generation of girls/young women find self-respecting ways to express themselves.  “1980s Kim” was a person who really needed to learn boldness. Bravado made me feel frustrated and loud on the inside. Boldness has made me feel stronger and in control of my life because it has a purpose— to give me the quiet, inner confidence to build myself (and others) up.

Bolder sisters, how have you been able to turn bravado into authentic boldness?

Kim Woods earned a Bachelor of Science degree in Computer Information Systems at DeVry University.  She developed a love for writing poetry and short stories as a child.  Kim is socially conscience and her desire to use her life experiences to help others is what drives her to seek opportunities to share her story.  She decided to write freelance for the Bolder Sister because it is her desire that women evolve and thrive in their own authentic truth.

Kim resides in Chicago, Illinois and has one son, Donald.  In addition to writing, she spends free time creating unique wall art, decorating, and teaching herself how to sculpture.

One thought on “Bold vs. Bravado” 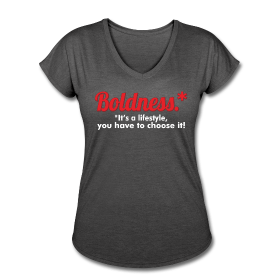