I’ve said it before and I’ll say it again, bolder sisters are everywhere. I find myself searching for them in each of my experiences. It seems as though more and more women are actually doing what they love despite fear, doubt and naysayers, which is refreshing. These bold women are within my family, on my job, in my social networks and in non-traditional roles we sometimes forget women can do.

As you might imagine, a circus, the Ringling Bros. and Barnum & Bailey circus to be exact, has quite a few bolder sister performers representing a variety of backgrounds. Aainya Raphiel is one of those women. She is the first female in nearly 30 years to join the King Charles Troupe, which is the unicycle-riding basketball team in Out Of This World with Ringling Bros.

I had the opportunity to ask Aainya about her experience and here’s what she had to say:

The Bolder Sister: How did you get into this career?

Aainya Raphiel:  My grandfather was a member of the original troupe in 1969, so some of my oldest and fondest memories are rooted in this business. I’m actually a fourth generation King Charles Troup member! I knew from an early age that I had to get in on the action, and I was lucky to be able to start young and develop my skills as I grew up.

The Bolder Sister: Why do you think it took so long to add a woman to the troupe?

Aainya Raphiel: The troupe has always welcomed female members to join the troupe, and we have had women join, but no one has lasted unfortunately. The physical demands of the sport can be incredibly taxing on the body so it takes a distinctive level of determination and fitness to keep up. Also, there’s no denying it can feel like a “man’s world” at times, so it takes a specific personality to break that glass ceiling.

The Bolder Sister: How do you feel being that woman?

Aainya Raphiel: While it can be very overwhelming at times, it is such a rewarding feeling! I am the second official “queen” of the King Charles Troupe, as the solo female member, and I feel so lucky to be walking (or should I say pedaling) in the footsteps of my grandfather.

The Bolder Sister: What do you enjoy most about working with the King Charles Troupe?

Aainya Raphiel: The best part is breaking down barriers everyday by learning new tricks and proving there is no obstacle I can’t overcome with enough practice. I am constantly perfecting my skills to be the best I can be. Another aspect I really enjoy is interacting with the greater unicycle community that makes me feel like I am a part of something even greater than our troupe.

The Bolder Sister: In what ways did you have to be bold being in a male dominated career?

Aainya Raphiel: I’ve had to be confident and believe in myself every step of the way. My grandpa believed I was capable of handling the pressure and I am making him proud by proving him right. No matter how many times someone tells you “no,” you can’t be afraid to pick your chin up, look that person in the eye, and say “YES.”

The Bolder Sister: What advice would you give to other young women who are struggling to be bold and confident?

Aainya Raphiel: I would share my favorite motto: “She who is brave is free.” It’s a tough world out there, especially for women, and bravery will help you to try new things without fear of failure. I also like to say that no one can make you feel a certain way without you allowing them too, so remember how strong and powerful you are! Anyone who says otherwise is behind you.

Bolder Sisters, believe me when I say Aainya is one of many bolder sisters performing with Ringling Bros. If it’s been a while since you’ve gone to the circus, like it had been for me, I highly recommend a visit. To learn more click here.

Here are a few pictures from my recent experience. 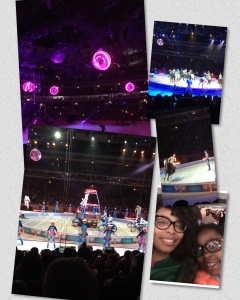